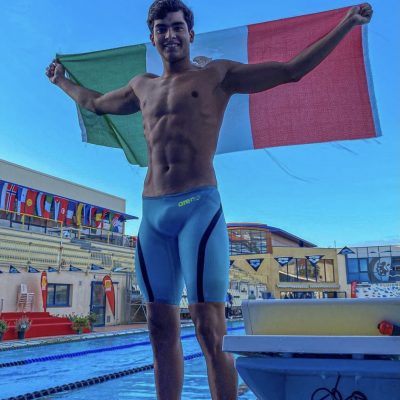 Fighting for more than a dream

Motivation, hard work and faith can take you to places you never imagined existed, and this is exactly the approach that Emiliano Mora has taken since he decided to dedicate his full love and energy to swimming.

Mr. Mora is not the most talented swimmer or athlete on earth, but he definitely is the most dedicated and has sacrificed a lot to be where he is right now.

Growing up, Mora was one of the best age-group swimmers in the entire country and in 2014, due to his outstanding performance in the National Championships that were organized in Veracruz, Emiliano got the opportunity to represent his country in the North American Challenge Cup.

Even though this was a huge motivation booster, Emiliano still knew that he had to work harder and be more disciplined, if he really wanted to be remembered in the sport of swimming.

Never give up, hard work pays off:

He came from the best moment of his swimming career, however, around 2015 there was a moment where Emiliano found himself in a very complicated athletic situation: no presence of a coach which resulted in non improvement in his times. He was about to give up swimming, give up his dreams and the most important thing; he was about to be self-disappointed.

He was not focused, he was not the same Emiliano that everybody knew, but you know what he did? Giving up was never in his dictionary and found a way to train by himself. Every morning, every night, in the pool, at the gym; because he’s hungry and he wants to become the best breaststroker in the history of Mexico.

That being said, with the help of his parents, new coach, but most importantly his desire and ambition lead him to be part of the World Junior National Team that participated at the 2017 World Junior Swimming Championships in Indianapolis, US. He did not have the performance he was hoping for and he even accepts to not be at his 100%: “I was not fully ready. The preparation was not ideal.”

Now imagine, what can he do with the proper training, mentorship and facilities? His potential, but most importantly his character and mindset are out of this world. He will never give up and always see the positive, within the negative.

Growing up in Colima, where the safety situation is terrible because of a war that cartels have between them, with no support of his local or national government, with no access to 50-meter pools, with no teammates to train and interact with, and still; being the current Senior Short-Course National Champion in the 50 and 100 breast, having attended the 2021 Mare Nostrum and being in the mix to be part of the Jr. PanAmerican Swimming Team. This is something that only Emiliano Mora has been able to achieve.

Your actions definitely determined your future:

Nowadays, Mr. Mora is still training with the help of Nicolas Torres, to pursue the dream of becoming an Olympian for Mexico in Paris 2024. “I only can, if I put all my effort in and outside the pool. My goal is to be swimming around 1:01 (100 breast) this Summer and be ready for the Pan American and Centro American games in 2023.”

He has the talent  to do it, but he is aware that talent without the presence of dedication is nothing. He is on the right track and I’m sure that you will know his name in the near future.